Are you Learning, Earning and Advancing? 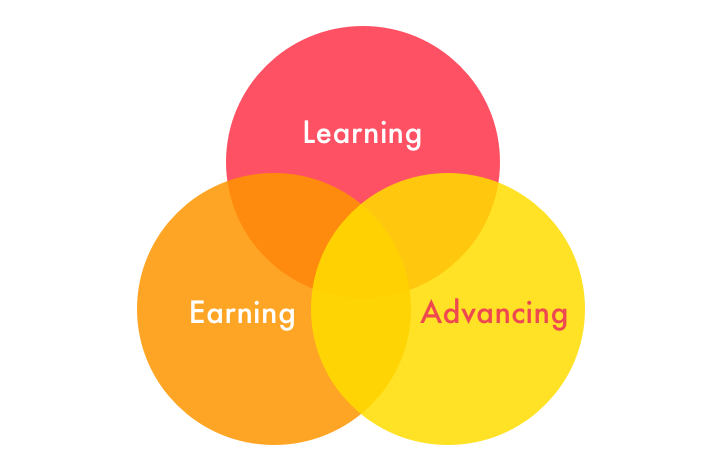 I once got great advice while overhearing someone else’s conversation. My old tech lead was chatting with another engineer in my team and he said something along the lines of:

“In any job I regularly think about whether I’m Learning, Earning and Advancing. I don’t stay anywhere if I’m not getting at least two out of three of them.”

I have followed this advice for years and it has really helped me to evaluate positions I was in and compare potential job opportunities. My old tech lead went into a little detail on what he meant by each of them, but I’ve since made up my own criteria for assessing them.

This one is pretty self-explanatory. I don’t want to be in a place where my knowledge is getting stale, or where the company I work for does not understand the value of learning new skills on the job.

It’s important to know what you’re aiming for, as with all of these areas, so I’ll have a target in mind for what areas I want to develop in. Currently, I want to get better at building out bigger and more complex features, and I want to learn more about the architecture of applications.

I also think about how I like to learn and whether that can be catered for. I’m an online course and conference kind of gal. Though, I know others can be book people or are happy with online articles. Check that these can be organised for you!

We can’t know everything, but having the opportunity to spend time learning new skills at work is a great way to check that you will grow in your role.

The more you learn and advance in your career, the more you would expect your salary to increase too. In the classic talk / book ‘Drive’ by Dan Pink he talks about what really motivates people at work and money is one of them. He outlines how lack of motivation can come from salary and benefits being too low.

Though, there is a limit. Apparently more money as an incentive for a job like a software engineer can lead to poorer performance.

We want to be paid enough to feel comfortable, which is a different amount for each person. I would also say that “feeling comfortable” isn’t just earning enough to pay the bills, but being paid fairly in the context of your industry, geographical area and in-line with your colleagues doing similar roles.

I deffo recommend watching the talk Drive if you haven’t seen it, I picked up a lot of gems from that video when it came out many years ago. I also recommend sites like Payscale to get a better idea of how much your skills are worth.

While people like to tell me “it’s not all about the money”, a really big part of work actually is.

So this one is a bit wishy washy but, it’s about getting formal advancements in your career, i.e. promotions, job changes or extra responsibilities.

Again, it’s useful to think about where you want to get too in your career and the steps you could take along the way. This could be a promotion into a more senior version of your role or the opportunity to transition into a different role that you’re interested in. Like going from a Software Engineer to a Site Reliability Engineer or from a Data Engineer to a Product Manager.

I see myself in some type of senior leadership role some day. So, while I am developing my skills as an engineer, I am also thinking a lot about improving my leadership skills and looking for opportunities to work on problems that aren’t just technical.

While I’m a long way away from actually doing that role, there are steps in between that I can take sooner rather than later. In the past I’ve taken up line management and tech leadership responsibilities, which have both been huge learning curves and soo useful.

Having formal steps in the direction you want to go in is a great way to prove that you’re making progress towards your desired goal.

There is definitely crossover between the three areas and if you’re working in the sweet spot where all three areas crossover, then lucky you.

As a side note, I spend a lot of time looking to other people in tech to get inspiration for what my future career could look like. I’ve found it useful to remind myself that while other people’s careers always seem to be super inspiring and wildly unachievable, I am on my own path and making the decisions that suit my skills and interests. My journey isn’t a straight line to some promised land, it’s a squiggle. I try things out here and there and change my mind about what I want to do almost every week. C’est la vie 🤷🏾‍